Perched in a quiet valley in the village of Jangpyeong in between Yongpyong and Pheonix Park (roughly 30min west of Yongpyong and 10min east of Pheonix) is 정강원 한국 전통음식 체험관 (Jung Gang Won Korean Traditional Food Experience Center).  It offers traditional home stay, cooking classes and a small tour dedicated the the art of ‘Korean fermentation’ but it’s main draw is the restaurant which offers traditional course meal.  As mentioned in my other blog posts, traditional Korean ‘course meal’ is a somewhat a misnomer as Korean tradition is to serve all dishes in one serving for maximum visual impact of plentifulness. Nevertheless Jung Gang Won (and many other modern Korean restaurants) do serve a set meal in courses.  What’s described here is their 전통한정식 (juntong hanjungshik, traditional Korean course meal) priced 35,000 per person, the hallmark of Jung Gang Won boasting various Korean cooking techniques and all the refined presentation. 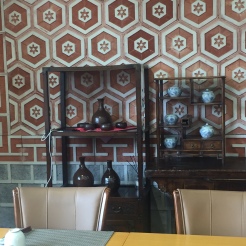 Jo Jung Gang, proprietor, opened Jung Gang Won on this site in 1999 and  its origins can be traced back to Dongchon  in Seoul.  Dongchon had its reputation in its heyday as the presidential canteen frequented by the two Kims.  Mr. Jo is an advocate of fermentation, traditional and ubiquitous technique used in Korean cuisine to add depth to flavors and lengthen the lifespan of food in the days when refrigeration was poor. The cooking school and the museum arms are dedicated to this heritage and art of fermentation in various types of food preparation.

The meal kicks off with a couple of appetizer plates of cold cuts and vegetable strips in buckwheat wraps and salad-like dish consisting roots and nuts. Main course includes 떡갈비 (duk galbi, beef patty), 된장찌개 (deonjang chigae, spicy miso soup), 굴비 (gulbi, grilled) and 반찬 (banchan, side dishes).  Appetizers and banchan (side dishes) vary by season.  For those uninitiated the menu includes a small number of a la carte dishes such as bibimbap.