Minami Aoyama (South Aoyama) is the area north and south of Omotesando dori, east of Omotesando Metro station. It is an haute couture version of its neighboring Kita Aoyama (North Aoyama) and has a more relaxed and refined atmosphere. Even on Sunday afternoons crowding is less of a problem to be able to stroll around furniture shops and designer boutiques.

The neighbourhood is a pilgrimage of sort to Pritzker Prize winners competing in some extraordinary modern-design contest from Chanel’s Peter Marino-designed black and white cube to Jun Aoki’s stacked-box design for Louis Vuitton.

Around 2003-2004 the area witnessed a significant facelift with a rush of star architect mania in flagship designer shops.  Inflection point was perhaps the Prada building, just south of the Omotesando intersection in Minami Aoyama is a spectacular, six story stake of crystal bubbles by Herzog and de Meuron, built in 2003 at a cost of US$80 million.

Diagonally opposite is Miu Miu again by Herzog & de Muron covered by a huge steel flap but underneath reveals warm copper sheets. Together with Stella Maccartney sporting a cubic cantilever mesh facade made from aluminium, the two buildings weighs down the avenue with two gigantic white cubes. 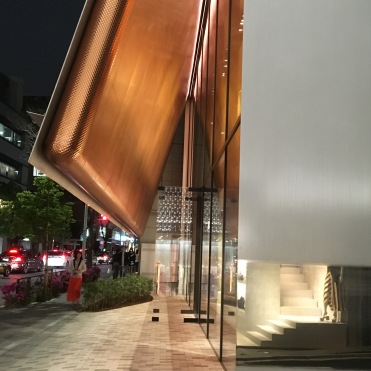 Under the eaves of Miu Miu

Grey box lights up at night for Stella McCartney

One of my favourite is Toyo Ito’s Tod’s, concrete structure as surface in which overlapping tree silhouettes soars from the ground. It sits on an L shaped plot with very narrow frontage which must have been an interesting design challenge. 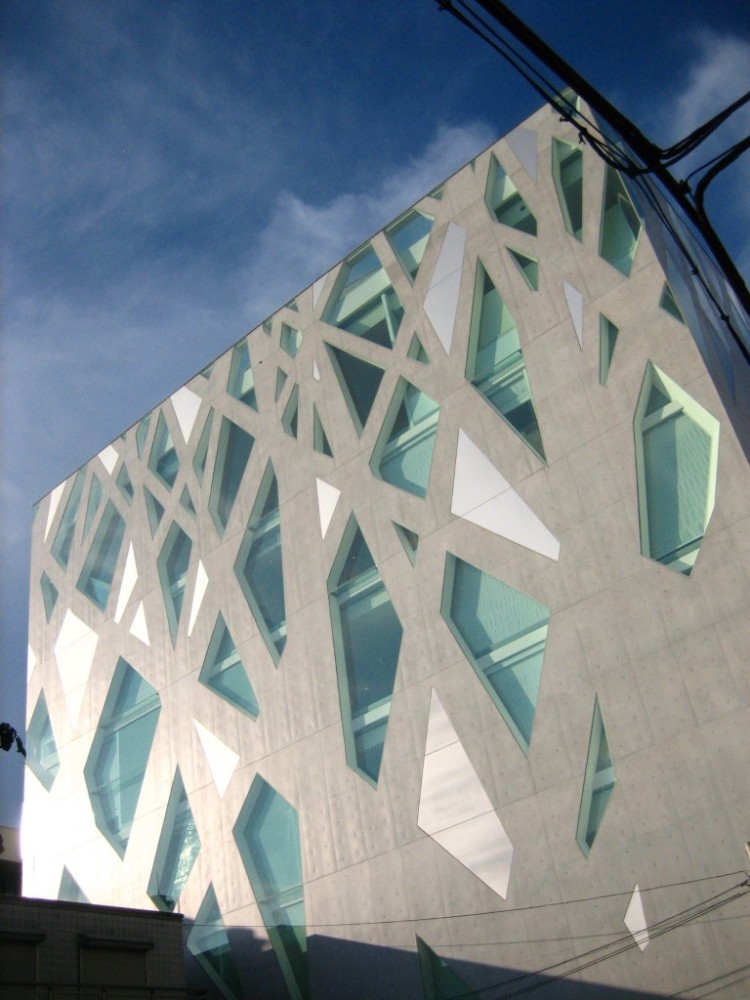 Obstructing half of that L shaped Toyo Ito building is Norihiko Dan’s Hugo Boss store.  I cannot apologize more for this Babel tower like structure with brute columns surrounding the facade but it is a force to be reckoned with and does reflect the pulsing energy of Omotesando.

Intersect by LEXUS is a space true to its ‘multi-purpose space’ concept which houses a cafe, bistro, LEXUS garage and retail.  A space generating so little revenue on a piece of world’s most expensive real estate could only exist for LEXUS in Tokyo… The glass box lined with wooden mesh wire is designed by Wonderwall, an interior design firm of Masamichi Katayama.

One thought on “Star architect mania in Minami Aoyama”