First thing that struck me when I entered Terminal A at Tegel was ‘why did taxi drop me off on arrival floor and where’s the escalator to departure and check in hall’? It then occurred to me that I’m at Berlin Tegel, apex of two things the world needs more of: mid-century modernist design and German efficiency.  Integrated ebb and flow of arrival and departure on single floor with maximum distance from taxi curb to departure gate of less than 30m.  This is made possible by hexagonal design of Terminal A which eliminates  transit zone and allows that each gate with its own departure security clearance  and arrival exit.

This does mean an extended curb side from one end of the airport to the other but this is inconsequential as long as you’re dropped off at the near vicinity your airline counter of choice. Through the automatic double doors of hexagonal terminal A, step into your airline check-in queue, enter the departure alley into security check and you’re immediately faced with your departure gate. 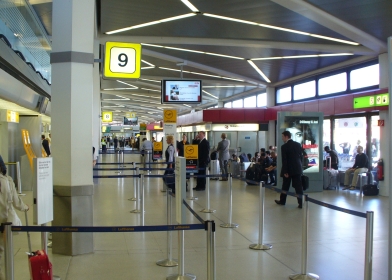 Each gate with own departure security and arrival exit

Thank God for the mini-duty free kiosks in front of each gate since I had over an hour to idle now what usually takes 30min even in the most efficient Asian airports took less than 5. So abruptly short is the journey from check-in to your gate compared to kilometres of meandering I’ve become accustomed to in star architect designed megalo-ports, the boarding experience is refreshingly bewildering. Sure, Tegel is a vestige of the old air travel days when airports served lighter demands but looking up Wikipedia reveals 20Mn passengers passed though it in 2016 so it’s no mignon of transportation hub. While Naritas, Chep Lap Koks and Changis may justify their ever sprawling addition of terminals with distant connections even before air travel, more regional airports should take cue from Berlin Tegel in operational design. Haneda and Gimpo (two secondary airports in major connection hubs) take note in their next renovation plan, please.