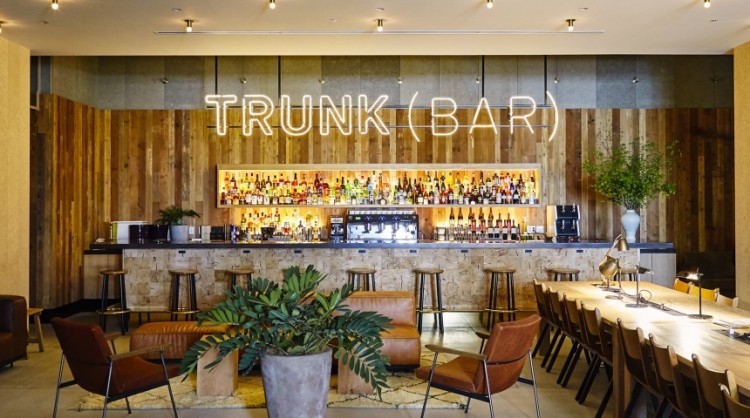 It’s a common misconception for would be travellers to Tokyo that this city of super abundant creativity and modernity has numerous well-designed, boutique hotels.  Well … there aren’t.  There’s probably many reasons and this blog isn’t meant to be for real-estate finance mundane so I’ll curb it to a couple of inter-related reasons: prohibitive land/development cost (which forces to build ‘up’ – read many 100’s of room count) and developer’s (most of them being large real estate firms with salarymen punting risk free ideas) formulaic development approach.  Resulting phenomena are either Four Seasons on top of metro stations or what locals call ‘business hotels’ which are three-and-half-star, 15 sq.m. sardine cans  stacked on top of each other. I’ve been asking my friends in design, media and hotels for years ‘where’s a cool hotel to stay’ and the answer is a few seconds of delay then ‘maybe Claska?’.  Claska is a reasonably designed hotel in a not-so-reasonable location and is a decade old(!).  Now finally, there’s an unapologetic answer to that question – Trunk Hotel.

Hotel is slightly elevated on top of an undulation common to Shibuya and the horizontal program of the facade gives it an imposing presence, despite its small foot print. Black steel beams layered lengthwise alternated by concrete exterior makes a confidently minimal look. Use of timber decks, street level terrace and plants lining the terrace softens the program and make it sober yet inviting.

At the foot of the entrance to the right is Kushi restaurant (skewered meats – it tastes a lot better than it sounds).  It is slightly sunk into the ground and entering it has a feeling of inviting yourself into a private, inner sanctum.  In the evening the indoor kushi bar counter as well as open space deck is buzzing with energetic crowd.  Outdoor in Tokyo does mean smoking so if charred food with involuntary smoking isn’t your thing head to the cafe in the hotel.

Opposite Kushi restaurant is an intriguing shop concept which sells Trunk branded assortment of in-room amenities like toiletries to bathrobes but also fashionable casual clothing brandishing square block Trunk logo.  It also stocks variety of local products like sake and beer craft-brewed near Shibuya. It’s all part of their ‘Socializing’ concept which is meant to promote Trunk Hotel’s role as a social hub as well as purveyor of social good.  Browsing around though, there isn’t much capturing one’s attention but it’s nevertheless noble and quirky initiative.

So now the most challenging part of this long awaited newcomer design hotel – guestrooms.  This is Shibuya after all, one of the most expensive piece of real estate even in already asset bubbly central Tokyo.  Standard rooms are small –  20 sq.m. small and nine of 15 rooms are Standard category.  It’s a local regulations thing to allocate certain number of single-occupancy rooms – measure to prevent proliferation of love hotels.  This means nine of 15 rooms are smallish single rooms.  Not all rooms are tiny… there are four suites, one of which is a massive 140 sq.m., duplex apartment with full kitchen and stunning terrace overlooking leafy Shibuya. But wait… 15 unit hotel with nine single-rooms and four suites (do the math for the rest)? 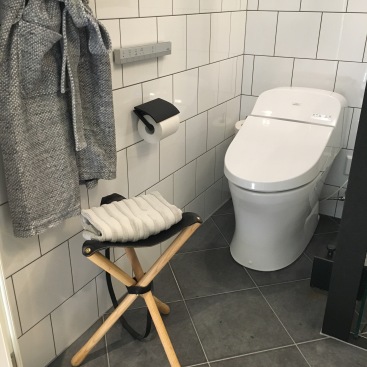 Single rooms are small but it packs into 20 sq.m. a lot of uniquely Japanese  space-smart designs.  Mattress is raised above the floor by a plank platform which visually separates the bed from (barely) living space.  Stylish minbar cabinet doubling as book self holds interesting lifestyle magazines including their in-house newspaper.  What’s inside the minbar is is even more interesting, local sakes and beers.  Compact bathroom is kitted with pretty much all necessary amenities and a spacious shower cube large enough for non-Japanese.  Problematic is lack of a cabinet – it’s replaced by a couple of hangers on the bedroom wall, utterly inadequate for travellers visiting more than a night.

Trunk is at the bottom of Cat Street (キャットストリート) which is pedestrian only, half a mile strip running perpendicular to Omotesando-dori and hipster nation of Tokyo. While the stretch has gradually gone big-brand upmarket over the years, it is still there you can find Champion washed denim sweat-shorts, custom-order bike shops and up-and-coming NYC brands like Save Khaki United.  Because of its access from Cat Street, many may associate Trunk with Omotesando (or Harajuku) but in fact the fastest access for those familiar with Tokyo Metro is from Shibuya Station.  Come out to Hachiko (Richard Gere dog) statue, cross the street north toward Yoyogi/Jingu-mae and soon enough you’ll approach equally hipster neighbourhood of Shibuya from the backside.