The first time I saw Sydney Opera House was in 2000 during my first visit to Sydney and the obligatory walk down to the rocks.  I still remember my first reaction at the time – ‘it’s not as a big as I imagined…’ but no less awe inspiring’.  Many times had I seen the images of the UNESCO World Heritage Site which to most people around the world is the icon of Sydney.  It was wildly modern – curvature of the shells floating on linear platform like large white sails contrast to deep blue waters it stood upon.  So many unusual details in its construction strangely coming together, so beautifully.  I didn’t know how to quite make of it other than to snap a lot of photos.  Remember, this is before panorama, and way before iPhone.  I was armed with an early version of Sony compact digital (RX something) and the only way to take in all the details was to snap a series of photos and stitch multiple prints side-to-side to pin them up on a cork-board.

Since then I’ve been exposed to a lot more buildings and become a student of built structures. Revisiting it now, I actually feel it to be even more awesome.  What has changed?  I frequently encounter immensely grandiose and outrageously unworldly buildings in my travels.  So what is it about Sydney Opera House that is refreshingly awe-worthy?
For one, it is elegance of the curves.  Considering this was built in the time of mid-century modernism which was all straight lines, Sydney Opera House set itself apart by its undulating curves.  Curvatures constantly changing height contrasted to linear platform. 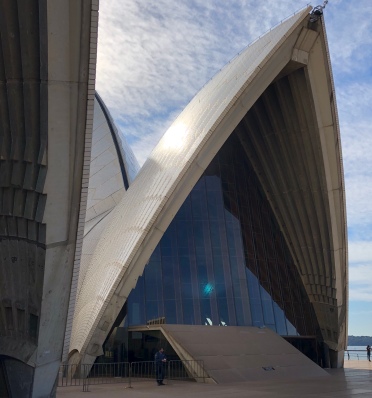 Second, the shells rise and fall, meaning the inflections have inherent end points which moderate its scale … to human scale.  You approach the site, walk up the steps with your gaze fixed upwards to the roofline and come face to face with the open mouth of the shells.  It all comfortably comes into perspective, without having to cock you neck for adoration.

Lastly, there’s technology.  The shells are supported by a system of precast concrete ribs – all possible due to the wonders of concrete construction.  Encasing those brute shells and ribs are the most fragile of materials, glazed ceramic tiles.  Apparently Frank Gehry who was on the jury when Jorn Utzon was awarded Pritzker Prize said the building was well ahead of its time and far ahead of available technology.